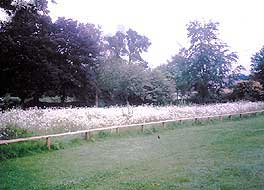 The wildflower meadow project was started to provide a focal point for the group in Usk.  We approached Usk Town Council and Monmouthshire County Council to see if they would release part of the Old Market field/Memorial Hall field (now Owain Glyndwr field) to enable us to create a wildflower meadow.  Our work on the meadow has been recognised with a plaque, awarded by Usk Civic Society in 2004.

We have planted a wide range of  native flowering plant species as plugs or seed to attract insects; butterflies, ladybirds, moths and other bugs.  In the first year the meadow was awash with poppies, even though they were not in the seed mix!  They looked magnificent.  The amount of insect life attracted to the meadow from the start surprised us all, especially butterflies, and including Brown Argus (Aricia agestis) and abundant Common Blues (Polyommatus icarus).  Insect numbers have increased over the years, which in turn has attracted a greater variety of birds, a local resident commented that “He hadn’t seen so many different varieties of birds for a long, long time”.  The area is cut annually, usually in October, and the mowings left for about two weeks to allow any seed to fall.  The area is then cleared and 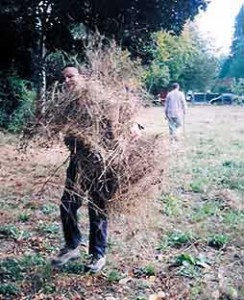 Gathering hay at the end of summer at the meadow

the hay stacked to provide additional cover, shelter for all sorts of creatures.  In 2004, whilst cutting, nine frogs were counted and survived!

In the autumn of 2009 we reseeded the meadow and planted bulbs to increase diversity.  We have also planted roses to create a boundary hedge.  The Britain in Bloom judges were very complementary about this project, which is looking at its best during high summer.  By 2011 the meadow was finally reaching the stage that we first envisaged nearly 10 years ago.  Most of the plants are now perennial and are becoming well established.  We were entered in a national award competition for our work on the meadow.

We undertake surveys of the area throughout the seasons, and found that most of the bird nest boxes that we have put up had been used.  In 2012 we added a herb planter, which continues to be well used – thank you to those who used it, for using the herbs responsibly and sparingly, and also for weeding and watering it when necessary.

We realise that once the flowers have bloomed and set seed the area may appear neglected, but as far as possible we want the area to emulate a real wild flower meadow which has been left to its own devices.

Particular thanks to George, Glen and John for keeping an eye on this area and maintaining it.

The group has made tremendous inroads on the old railway line to create a fantastic nature trail.  The track from the Monmouth road to the Pontypool road is now accessible with steps and a walkway through the old railway tunnel.  We hope that funding will be found in the future to install lighting in the tunnel without disturbing the small bat population (two species), in the meantime bring a torch to find your way.

Contractors have removed much of the earth spoil which had accumulated over a long period of time and encroached onto the footpath.  The track from the Pontypool Road end to the Monmouth road end now forms a vital link in the Usk Nature Trail.  A plan of the trail in its entirety has been published,  and members of Usk Primary School’s Eco Club have helped to place boards next to various trees explaining their uses in the past..  The Nature Trail was officially opened in March 2010 by the then Welsh Assembly Government Minister for Environment Jane Davidson.

Many flowers with a liking for the damp conditions have been planted along the track, for example marsh marigolds, water forget-me-nots, water avens and marsh orchids.  We have installed two preformed ponds and three lined ponds;  to date eels, leeches, freshwater shrimps and gammarus have been recorded in these pools along with common newts, frogs and toads.  Members of the group undertook a survey of newts for the CCW (Countryside Council for Wales) and the rarer great crested newt was found in 3 locations close to the railtrack.

The commitment of the railtrack volunteers is truly amazing, but their work has achieved remarkable results that are used and admired by the local community.  We would like to say a particular thank you to the staff and students from Coleg Gwent, as well as to Tom from Keep Wales Tidy for all their help along the rail track, and to Olly and his team from Dwr Cymru for their help with the wet part of the scheme, and to Peter Baker, Cwmbran for the donation of the wood chippings.

We are always seeking volunteers to help with all aspects of this very worthwhile and satisfying project.  We usually meet at Ladyhill (almost opposite the school) on the third Saturday of the month when practical elements of the project are tackled. Volunteers are always welcome – individuals, groups, families or couples.  Wear old clothes, strong boots or wellies, and strong working gloves to protect your hands; bring lunch too (depending on how long you intend to stay).

In 2012 we started a link with the Woodland Trust and began helping restore the grounds of the Old Maternity Hospital site at Cefn Ila.  We want to bring the orchard back into use, as well as the walled garden, and have already made a start.  In 2013 volunteering at Cefn Ila progressed well, and major inroads were made in clearing invasive laurel – this work will resume in September 2014 once the nesting season is over.

Over the last few years we have bought planters to be placed at different locations around Usk. These have been planted with herbs and around the bases 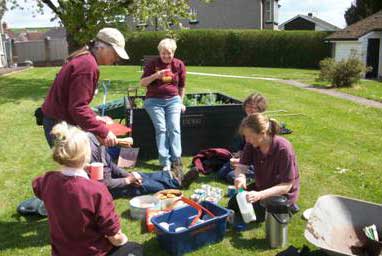 One of the planters containing edible herbs sited around Usk

The latest planter (pictured left) was installed at Sunnyside, Ladyhill, Usk, near an older persons complex. Almost immediately local residents took it under their wing making sure it is watered, kept weed free and generally maintained. The residents have planted herbs of their choice in amongst the original selection. We are very heartened by this project, which has fulfilled our idea of a community resource where residents are encouraged to use any of the herbs for culinary purposes or other uses. The planters are made from recycled plastic, and our aim is to make them sustainable, rather than just using annuals that need to be replaced every year.

Future Projects – Can you help?

As many of our projects reach a stage of requiring only maintenance, we are always on the look out for new and exciting projects to get our teeth into in the Usk area.  Any ideas from the community would be greatly appreciated.  If you have an idea please contact Graham on 01873 852108.